With vaccines and increased knowledge regarding the pandemic, more trips were offered this year than in the previous two after cancelling most field trips in 2020. Below is a summary of the trips offered last year. 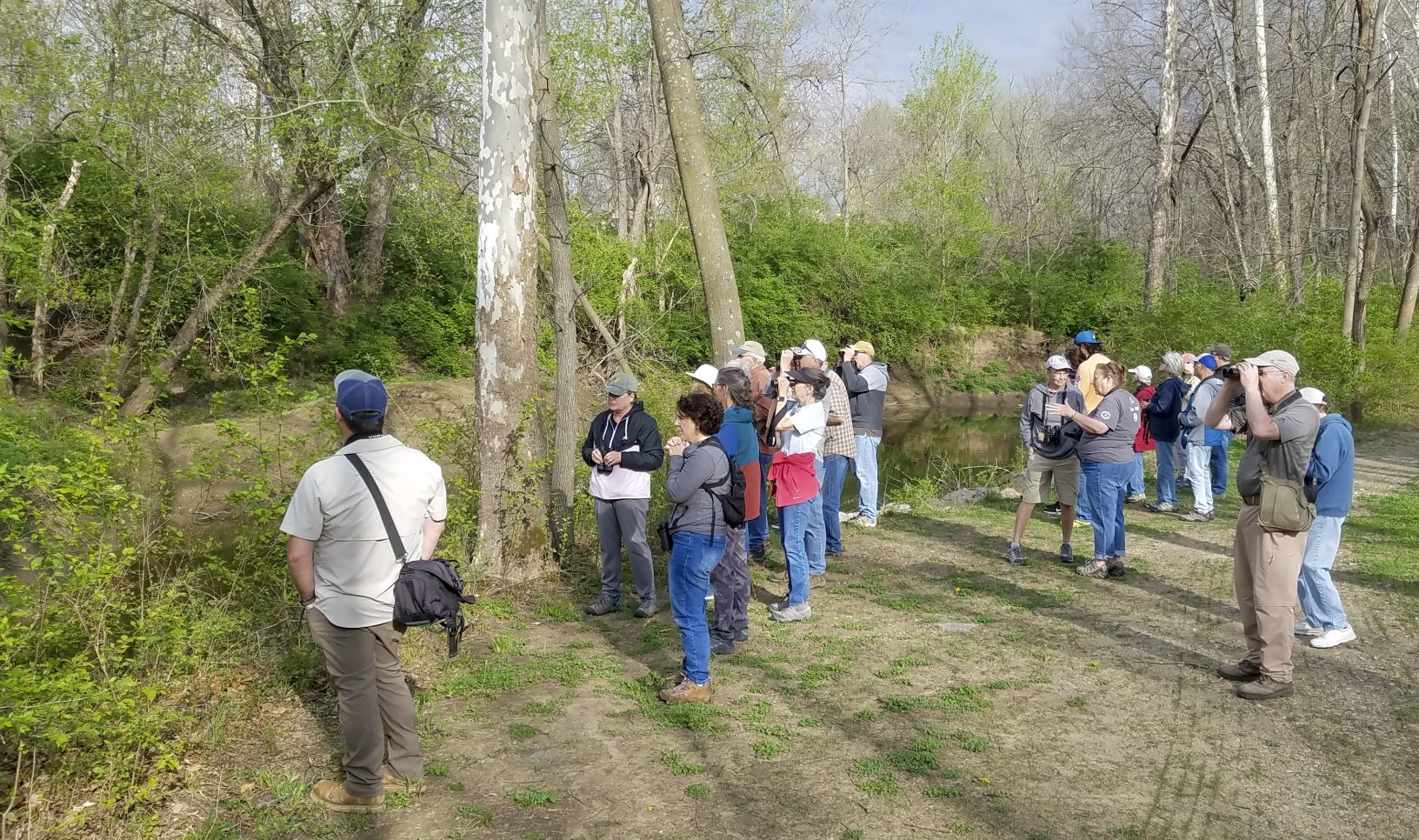 We hope you enjoyed one or more of the Burrough’s Field Trips and look forward to seeing you on one of the upcoming trips. Field trips include a diverse selection of locations from city parks, state parks, conservation areas, wildlife areas, and national wildlife refuges. During the 2022 Calendar year, the Burrough’s Field Trips saw many individuals experience new “life” birds. While gulls are a family of birds that not everyone enjoys looking at, Mark Land’s first winter Short-billed Gull and Black-legged Kittiwake were arguably the rarest birds found this year. Other cooperative species offered many fond memoriesas well.

There were 30 trips offered in 2022! This is still a smaller number than pre-pandemic levels as we settle into what each individual is willing to accept as risks, but it represents a big increase from 2020 and 2021! These trips included 24 morning walks, 4 all-day trips, and 2 evening gatherings.

Brief reports from past Field Trips

12/3/22 – Six individuals explored Lyon, Coffey, and Osage counties in east-central Kansas. A cooperative Long-tailed Duck at Lyon State Fishing Lake as well as a first winter Short-billed Gull and Black-legged Kittiwake at Redmond Outlet Park were the rarities found on this trip, but relatively –

11/5/22 – A handful of individuals spent the day scoping water in Miami and Linn Counties. After waiting for snow and rain to subside and the morning fog to lift over Hillsdale, the group found many waterfowl had arrived with the cold front and ended with nearly 90 species for the day.

10/29/22 – Twelve birders enjoyed a beautiful fall day of birding with David Easterla. Waterfowl were few, as mild weather in and few cold fronts from the upper Midwest have yet to deliver many birds to our latitude. Highlights included two active Osprey, a Common Loon and a Forster’s Tern at Mozingo Lake, a pair of Dunlin at the Maryville Sewage Lagoons, and a tree full of Harris’s and White-crowned Sparrows at Bilby Ranch Lake Conservation Area.

10/15/22 – Sixteen individuals gathered below the dam at Clinton Lake amid a calm chilly morning. Fifty five species included looks at Nelson’s Sparrows and a single flighty Sprague’s Pipit as lifers for many in the group.

10/14/22 – Winds were a challenge, but the fall bird census at Jerry Smith Park included 47 species including an amazing amount of Eastern Bluebirds over the recently burned prairie.

10/13/22 – Due to water conditions, a group of eleven gathered at Blue Springs Wetlands rather than Cooley Lake. Just over 50 species were observed in the morning with a decent number of migrating hawks keeping out eyes to the skies when winds made it tough to get sparrows out in the open.

9/21/22 – Very few migrants were observed among the roughly 30 species on this morning walk at Tomahawk Park, but a calm morning enjoying nature with friends is still a great start of the day.

9/11/22 – The group found a few southbound migrants along Tomahawk Creek Trailway and enjoyed the cool fall morning together.

5/18/22 – A half dozen individuals walked the rain soaked trails at Black Hoof Park and observed nearly 50 species.  A cooperative female Magnolia Warbler was a fun sighting among those species.

5/13/22 – Between the group that started at 6:30, those that came and went as we waited out the rain, and those that arrived at 8:30 with the weather delay there were thirteen individuals that met at Antioch Park as a cold front came through and dropped the temperature and rain.  49 species were observed with most passerines in one mixed flock.

5/12/22 – A dozen individuals gathered to complete the spring census at Minor Park and tallied 50 species.

5/11/22 – Nine individuals walked the trails of Mill Creek Streamway at Midland Access and had seventeen warbler species with a mixture of migrants and breeding species on territory.

5/10/22 – Ten birders, including one from Minnesota and one from Belize, helped conduct the annual spring census at Jerry Smith Park and tallied 64 species. This is the highest count for any census done at the park. Highlights were Mississippi Kite, Blue-headed Vireo, Alder and Olive-sided Flycatchers and 2 Canada Warblers- the latter clearly heard by all, but not seen.

5/6/22 – Ten individuals walked the trails at Burr Oak Woods and found over 50 species that included a dozen warbler species.

5/5/22 – A half dozen individuals birded the Blue Springs wetlands this morning. 66 species were seen and/or heard. The bird of the day everyone agreed were watching the Wilson’s Phalaropes putting on a show for us at a close distance.

5/4/22 – A small group of people walked around the trails at KCPL Wetlands in Gardner. A few shorebirds, ducks, swallows and other migrants were around which included a handful of Marsh Wrens.

4/27/22 – A large group gathered to search for birds at Black hoof Park and Lake Lenexa. Over sixty species were observed, including a variety of wintering birds, migrants, and summer residents.

4/23/22 – A large group walked the paved trails of Tomahawk Park in Leawood enjoying many first of year northbound migrants.  A good variety of warblers and vireos were mixed in among the many White-throated Sparrows, Ruby-crowned Kinglets, and Yellow-rumped Warblers.

4/20/22 – A half dozen individuals met at Cedar Lake to scan the lake and nearby trees for early passerines. A small flock of Cattle Egrets and Bonaparte’s Gulls were among the species observed before the group went to New Century Fieldhouse to scan a pond of shorebirds. Over 50 species were observed this morning.

4/16/22 – A dozen individuals walked the paved trail along Wilderness Wetlands on a windy cold April morning but enjoyed 50 species including a large flock of Cedar Waxwings right next to the trail and a dark morph Broad-winged Hawk that briefly perched in the trees long enough to get a scope on it.

4/15/22 – Eleven individuals along the dam on the north end of Blue Springs lake to look through the waterfowl and gulls before walking the wetlands on the north side of the dam. Sixty-seven species were observed on the two walks including both eared and horned grebes.

3/8/22 – Twelve people attended the walk. They were first entertained by a Barred Owl hunting in a tree line. Near dusk they enjoyed a rare treat when a woodcock landed nearby in enough light for great looks. Several woodcocks were observed in flight and then seen on the ground.

3/5/22 – Nine individuals conducted the winter survey at Minor Park and found a wonderful mix or winter visitors and year-round residents. Winter Wrens, Juncos, a plethora of woodpeckers and a Bald Eagle with nesting material were all among the species observed on this walk.

3/3/22 – Twenty-six people gathered this evening to share in the Timberdoodles dance and display at Jerry Smith Park.  They peented and landed in the trail for the group.

2/26/22 – Sixteen individuals scoped Hillsdale Lake and La Cygnes lake on a relatively calm but cool day. Gulls at Hillsdale, a Red-throated Loon at La Cygnes Lake, and waterfowl in the energy discharge pond highlighted this trip.

1/16/22 – A handful of individuals enjoyed the calm morning with recent snow to see roughly 50 species of birds among the lake and flocked trees. Having American White Pelicans on Wyandotte County Lake is not a regular occurrence and they mixed in with a large group of other waterfowl and swans.