We hope that you enjoyed one or more of the many Burrough’s Field Trips and look forward to seeing you on one of the upcoming trips. Field trips include a diverse selection of locations from city parks, state parks, conservation areas, wildlife areas, and national wildlife refuges. During the 2017 Calendar year, the Burrough’s Field Trips saw many individuals experience new “life” birds, offered exceptional views of rare and tough to see birds, and time with other nature-loving individuals. 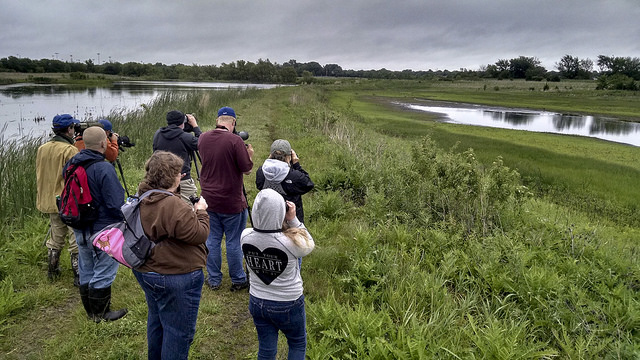 Wetland Wednesday Field Trip in May 2017

There were 37 trips offered in 2017! These trips included 3 overnight multiple-day trips to Council Bluffs, St. Louis, and Great Bend. In addition there 8 all-day trips and 26 partial day trips. The partial day trips included 20 trips in the morning that ranged as short as an hour or last until noon, 4 trips that started in the afternoon and lasted a couple of hours, and 2 trips that started at dusk and went into the night.

The 2017 trips had a total attendance of 326 people! Some individuals were counted multiple times in this tally if they attended multiple trips. The trips had 11 different volunteer trip leaders including six volunteers who led four or more trips and also a first-time trip leader! This is an amazing job and a huge thank-you to all that assist with these opportunities.

Brief reports from Field Trips in 2017

12/10/2017 – Participants carpooled around Smithville Lake and scanning from different vantage points to find 36 species. A White-Winged Scoter was found just before last light as gulls started to roost.

11/25/2017 – Nineteen people enjoyed the beautiful weather while looking at wintering waterfowl, raptors, sparrows, and year-round residents at Loess Bluffs NWR. A few photos from the day can be found on the hyperlinked eBird list.

11/12/2017 – Thirteen people scanned Smithville and found a couple of winter rarities; a Red-throated Loon and Surf Scoter mixed in with 30 other species.

10/8/2017 – Eight participants enjoyed the gorgeous fall weather and surveyed Smithville Lake; they found 24 species including a juvenile Peregrine Falcon, a Snowy Egret, and many gulls.

10/4/2017 – During the fall Census of Jerry Smith Park, four participants found 27 species consisting of some early fall migrants as well as summer residents.

9/30/2017 – Enjoying a gorgeous fall morning at Baker Wetlands the 17 participants observed 57 species including a Le Conte’s Sparrow south of the Discovery Center.

9/10/2017 – Participants enjoyed the wonderful weather, a couple of gull species, and fishing Osprey at Smithville Lake.

7/7/2017 – Ten people enjoyed the prairie flowers of the flint hills; they saw 30 species at Mt Mitchell and much more along Skyline drive in Wabaunsee County, Kansas.

6/17/2017 – Summer resident species were counted by 7 people at Blue River Parkway in Kansas City, Missouri. They tallied 39 species in the couple hour walk.

6/4/2017 – Twenty-One people enjoyed the prairie habitat around Dunn Ranch in Harrison County, Missouri. They found a Black-billed Cuckoo, Henslow’s Sparrows, Bobolinks, and others among 54 species.

5/17/17 – Rain in the forecast and all around limited participation, but 34 species were still at KCP&L Wetlands.

5/14/17 – After gaining security clearance at Fort Leavenworth, a group of 17 individual survey the diverse habitat and found 68 species!

5/4/17 – An Ovenbird highlighted a short early morning walk in search of migrants along Indian Creek Trail.

4/26/17 – Shorebirds and early migrants at KCP&L Wetlands were observed by 7 participants.

1/29/17 – A long-tailed duck highlighted the search around Wyandotte County Lake for the group.

1/21/17 through 1/22/17 – A group found a wide variety of waterfowl including Amercian Black Ducks and Mute Swans.

1/1/17 – Kicking off 2017 a handful of individuals search Blue Springs for overwintering birds. A Hermit Thrush posed for a picture even.