We hope that you enjoyed one or more of the many Burrough’s Field Trips and look forward to seeing you on one of the upcoming trips. Field trips include a diverse selection of locations from city parks, state parks, conservation areas, wildlife areas, and national wildlife refuges. During the 2018 Calendar year, the Burrough’s Field Trips saw many individuals experience new “life” birds, offered exceptional views of rare and tough to see birds, and time with other nature-loving individuals. 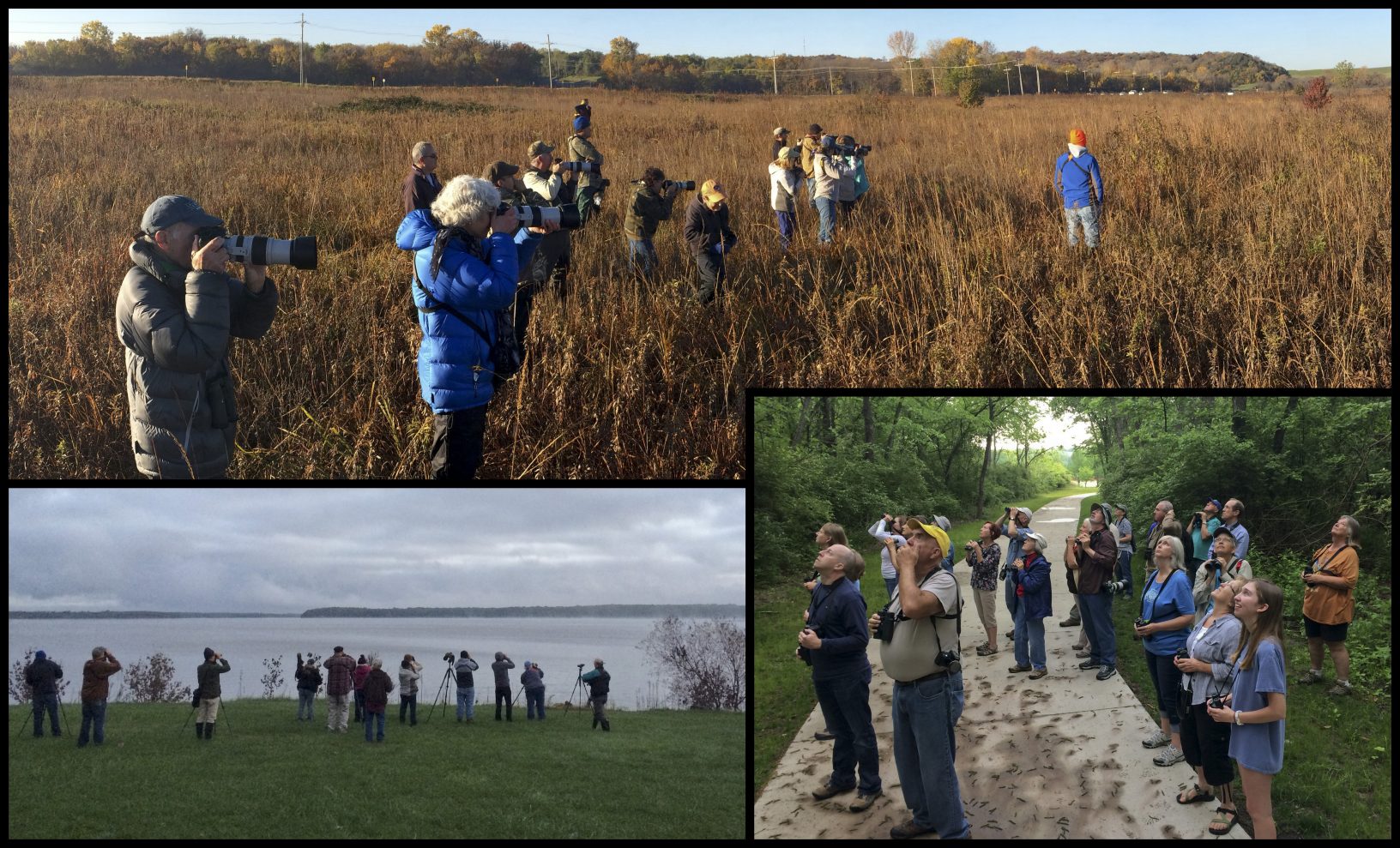 Total attendance of all field trips, including the leaders, tallied 514 people! Many individuals are double or triple counted, as each time a person attended a single trip they added one to this total. Amazingly, the trips had 17 different volunteer trip leaders!! A huge thank-you to all that helped with these trips! Three volunteers led 8 or more trips each, three individuals led trips for the first time, and three individuals from neighboring Audubon chapters led trips as we visited more distant areas. This is job well done and a huge thank-you to all that assist with making these opportunities available for everyone.

Brief reports from Field Trips in 2018

12/08/18 – Nine individuals spent the day search Coffey, Lyon, and Anderson County. A beautiful adult female Rough-legged Hawk was the morning highlight at Melvern Lake and three Black Scoters were observed at the other end of the lake. A Prairie Falcon at dusk capped off a fun day of 60+ species.

12/1/2018 – Overcast conditions with rain-shortened this trip to a few hours with few birds. A dozen individuals from Topeka and the Kansas City area scanned the Water Treatment Ponds surprisingly absent of gulls and had a short walk before the rain began at Kill Creek Park.

11/24/2018 – Twenty people enjoyed the views and sounds of large flocks of Snow Geese and Trumpeter Swans at Loess Bluffs National Wildlife Refuge through a leisurely drive around the auto-loop with many stops.

11/17/2018 – Twenty-five individuals spent most of the day together in Miami and Linn County Kansas searching for waterfowl and scoping the ponds and lakes. Over 80 species were seen throughout the day, with nearly 65 in both counties. Highlights included the cooperative Bonaparte’s Gulls that approached close to the group due to chumming, a very inquisitive Red-Breasted Nuthatch, an American Black Duck x Mallard Hybrid, and a Rough-legged Hawk.

11/03/2018 – In a joint trip with Midland Empire Audubon Society and Grand River Audubon Society, sixteen individuals scanned Smithville Lake from multiple vantage points. A Pacific Loon that was seen the day before and then again the day after, seem to tease the group with a distant appearance only to elude them in the end.

10/27/2018 – Eighteen individuals enjoyed a calm morning at the Model Airport Field below Clinton Reservoir.  LeConte’s and Nelson’s Sparrows were life birds for a handful of the group and a couple of LeConte’s sat close to the group as photography models. Franklin’s Gulls were still quite numerous at Clinton Reservoir and a single California Gull and Red-breasted Nuthatch were pleasant surprises.

10/20/2018 – An overnight weekend trip to Hitcock Nature Area in Iowa offered individuals the chance to see hawk banding up close and experience a hawk watch tower. Northern Saw-whet Owls were a species of interest that are usually seen during nocturnal banding on this trip but the Owls had not arrived at this location yet. Sunday morning the group was treated to views of a Red-necked Grebe and Western Grebe at Lake Manawa.

10//17/2018 – Six birders conducted the Jerry Smith Park fall bird census. Bluebirds, robins, sparrows, and finches were well represented with hundreds of individuals observed feeding on the natural abundance of small insects, fruit and grass and aster seeds. The survey wrapped up with a little group of Ruby-crowned Kinglets in the trees near the parking lot.

10/13/2018 – A nice sized group experienced the mass migration of Franklin’s Gulls at Hillsdale Reservoir and enjoyed a leisurely walk around Brown Wetlands. The 70+ species included a nice mixture of sparrows, warblers, nuthatches, waterfowl, gulls, and raptors.

9/20/2018 – Fifteen individuals enjoyed first light over a calm Longview Lake and enjoyed views of Caspian Terns and both expected Accipters among 30+ species.

8/24 through 8/26 – Thirty-five individuals from Kansas and Missouri enjoyed birds at Cheyenne Bottoms, Quivira National Wildlife Refuge, and the Larned area in central Kansas. Over a hundred species were observed and the owls and hummingbirds were life views for many in the group.

7/14/2018 – A dozen individuals participated in the first annual Grandview NABA Butterfly count. The group ended up with 38 different butterfly species between Jerry Smith Park and Meadowmere Park. In addition to the amazing count of butterflies, the group observed over 30 different species of summer breeding resident bird species.

6/9/2018 – Seven birders walked the trails along the Blue River near Minor Park and found 38 species on a humid but sunny and windless morning. The highlight was a fair number and variety of warblers.

5/22/2018 – A short walk around KCP&L Wetlands yielded three different types of flycatchers for the 8 participants among the 50 species. Overall there was a low diversity of shorebirds but the group had excellent views of Bell’s Vireos.

5/18/2018 – A leisurely walk below the dam at Shawnee Mission Park and stop near the Boy Scout Camp 1 yielded a few species and Chuck-will’s-widows for the 22 participants. The group was unsuccessful in hearing Eastern Whip-poor-wills at Blackhoof Park.

5/17/2018 – A large group commandeered the multi-use trail at Tomahawk Park to enjoy both breeding birds and migrants. Blackburnian Warblers and a nest-building Ruby-throated Hummingbird were the highlights from this morning walk.

5/15/2018 – Ten individuals walked the paved trails of Blackhoof Park and enjoyed 75 species. Many warblers were heard but few were seen well. An Olive-sided Flycatcher provided nice views for everyone.

5/12/2018 – Nineteen individuals surveyed Fort Leavenworth. A total of 94 species, including 14 Warblers, and a wonderful mixture of migrant and summer residents of grassland, riparian, and hardwood forest floodplain were observed. This is a unique habitat and the sheer number of American Redstarts and Rose-breasted Grosbeaks observed on the lowlands makes this a trip everyone should experience.

5/11/2018 – Three participants enjoyed a variety of waders, waterfowl, raptors, and passerines on the Blue River Parkway Spring Migration Census. Highlights included a flyover by a Yellow-crowned Night-Heron, two Green Herons flying together, and a Broad-winged Hawk. A male Wood Duck perching in a large Sycamore tree, a number of first-of-season Yellow-billed Cuckoos and 14 different warbler species were observed! Join us again at this site on Saturday, June 9 for the Breeding Bird Census.

5/10/2018 – A group of five people observed 99 species around Hillsdale Lake. A singing Pine Warbler was observed by one person who arrived a bit early while others were out listening to Chuck-will’s-widows.

5/8/2018 – Fifty-three species of migrants and resident songbirds were observed by 10 individuals at Antioch Park.

5/8/2018 – Forty-seven species of mostly migrant and resident songbirds were observed by 5 individuals on the Jerry Smith Park Spring Migration Census. Good looks (and vocalizations) at Least Flycatcher and House Wren. Join us again at this site on Tuesday, June 12 for the Breeding Bird Census.

4/26/2018 – Eight individuals enjoyed the calm, but brisk, morning at Tomahawk Park. Only a handful of migrant passerines were found among the 38 species.

4/21/2018 – Twelve individuals the autoloop at Loess Bluffs National Wildlife Refuge and ended with 95 species for the day.  A Piping Plover among many shorebirds, a hybrid Cinnamon Teal among the waterfowl, sparrows, and a Broad-Winged Hawk to start the day were the highlights.

4/15/2018 – A group of four hardy souls drove through snow to arrive at Four Rivers Conservation Area and occasionally left the warmth cars to scan the amazing habitat with scopes. A Peregrine Falcon hunting the flats at the headquarters, numerous shorebirds at Presidents Marsh, and a surprise Long-tailed Duck highlighted the 72 species trip.

3/9/2018 – 16 people gathered at Prairie Center in Olathe to view American Woodcocks. For six high school students and three others this was the first time seeing that species!

3/7/2018 – On a cool but relatively calm night 9 individuals enjoyed the calling, flight displays, and observations of American Woodcocks and Jerry Smith Park.

2/24/2018 – Overcast skies, a light drizzle, and fog were made it challenging to find gulls at Clinton Lake. A group of 14 people were unable to relocate the juvenile Black-Legged Kittiwake that has been around but did find a pair of Glaucous Gulls and a White-Winged Scoter among the almost 60 species.

1/23/2018 – Three participants conducted a winter survey of Jerry Smith park and found 24 species during a couple hour walk.  A beautiful photo of an overwintering Hermit Thrush is included in this checklist.

1/21/2018 – Fifteen people spent the morning scoping Wyandotte County lake and walking a few trails finding over 40 species and a nice diversity of waterfowl.