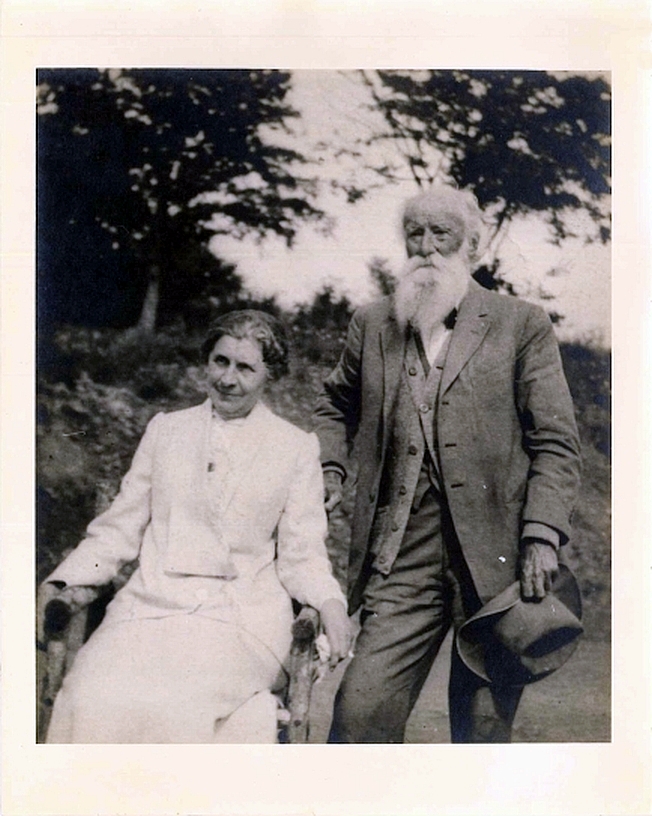 A most interesting item placed in our archives by past Burroughs librarian, Mary Conrad, is a photograph of John Burroughs taken around 1902 when he was 65 years old. Burroughs was born on April 3, 1837, so 2019 marks the 182nd anniversary of his birth. Burroughs Nature Club was named for the author and naturalist. He died in 1921, just 2 years after our organization was founded and left behind 23 volumes of writing, most being essays on nature. Burroughs’ writing gained popularity in the mid- to late 1800s which helped him form friendships with many famous and influential people, including Theodore Roosevelt, who shared his love of birds. In 1903, Burroughs was Roosevelt’s guest at the White House and then accompanied him on a long train journey west, ending with a two-week exploration of Yellowstone National Park. Burroughs’s automobile, a Model T, was a personal gift received from his friend Henry Ford. A walker all his life, Burroughs never felt completely at ease driving it and had several accidents. In 1916 he wrote, “I often wish I had never seen a Ford car or any other…Life is simpler and more satisfying without them.” For a comprehensive, entertaining, warts-and-all examination of John Burroughs’s life, read the book John Burroughs: An American Naturalist by Edward J. Renehan, Jr.

Ida Tarbell was also a fascinating character–she worked for 64 years as a writer, lecturer and investigative journalist in an era when women rarely achieved such notoriety. She wrote a book exposing the Standard Oil Company monopoly in the early 20th century that led to some anti-trust legislation and the establishment of the Federal Trade Commission. She also served on presidential committees under Wilson and Harding. Strangely, she did not approve of the women’s suffrage movement. She died in 1944. 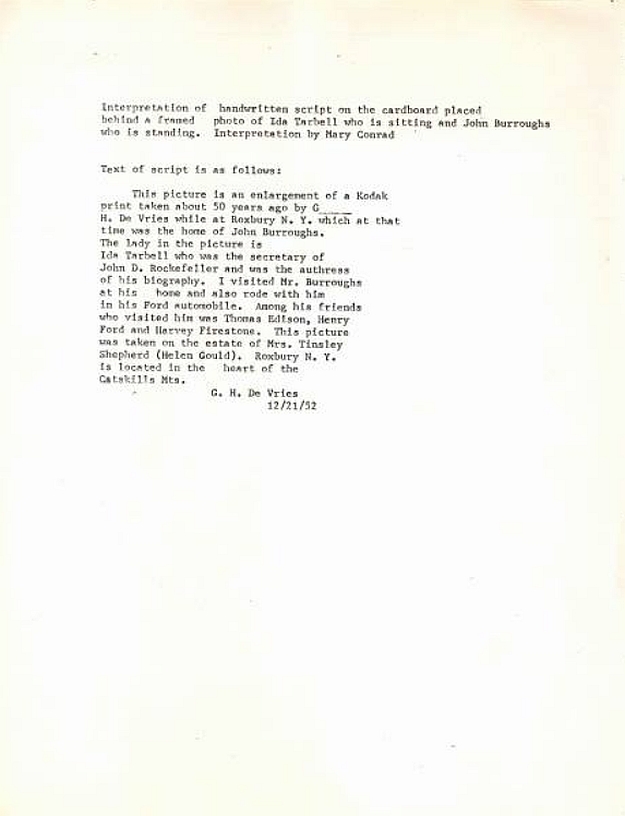 Reverse side of above photo.

The text on the reverse side of the photo reads, “This picture is an enlargement of a Kodak print taken about 50 years ago by G.H. De Vries while at Roxbury, NY which at that time was the home of John Burroughs. The lady in the picture is Ida Tarbell who was the secretary of John D. Rockefeller and was the authress of his biography. I visited Mr. Burroughs at his home and also rode with him in his Ford automobile. Among his friends who visited him was Thomas Edison, Henry Ford and Harvey Firestone. This picture was taken on the estate of Mrs. Tinsley Shepherd (Helen Gould). Roxbury, NY is located in the heart of the Catskills Mts. [Signed] G.H. De Vries 12/21/52.”