Albert Shirling with a young Turkey Vulture, ready for its closeup. Notice that Mr. Shirling had the foresight to wear an apron–vultures are notoriously messy birds!

Albert Shirling (1875-1947) was a teacher and naturalist who lived in Kansas City for over 40 years and was one of the founding members of Burroughs Nature Club. In fact, other members referred to him as the “Father” of Burroughs. He not only knew every bird in our region but was also a recognized authority on our trees and native plants. In addition to his involvement with Burroughs, he was a member of the American Ornithologist’s Union and served a term as President of the Audubon Society of Missouri in the 1940s. He was a modest man who never paraded his accomplishments, but gave generously of his time and energy so that everyone he met, young and old, might learn to love and appreciate (and protect) the natural world. As with Esther O’Connor, you will hear much more about this man as the BAS centennial year progresses! 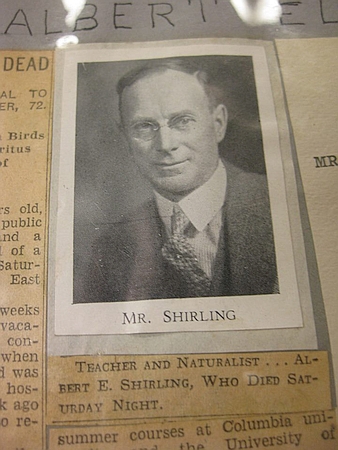 Albert Shirling passed away following a short series of heart attacks, on October 18, 1947. The KC Star noted, “Mr. Shirling was a modest man. He would be surprised to know how deeply he will be missed”.

Shirling lived less than a mile from Swope Park and never tired of exploring it and showing others its flora and fauna, in all seasons. In the early 1900s, there was a large group of Turkey Vultures that roosted and nested in Swope Park, near the limestone bluffs. One photo here shows a young Albert Shirling holding a young vulture that was photographed by Dr. Albert Cordier. Cordier was a surgeon and instructor at the Kansas City Medical College, and a devoted bird photographer in his free time. His best known book Birds: Their Photographs and Home Life (1923) can be viewed in its entirety in digital archives, or you may also see a copy in the BAS library collection! It’s well worth a look. The photography was amazingly sharp and detailed for the period, and his notes on bird behavior quite comprehensive but very readable. 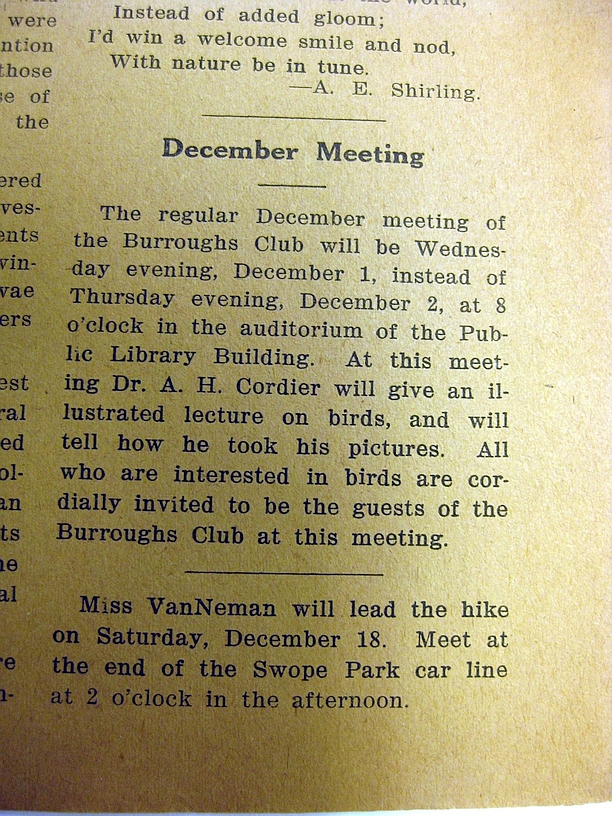 Naturally, Burroughs members were thrilled to have such a celebrity near at hand, and Dr. Cordier gave a program at the December 1920 Burroughs Nature Club meeting.

One thought on “The Father of Burroughs Nature Club”