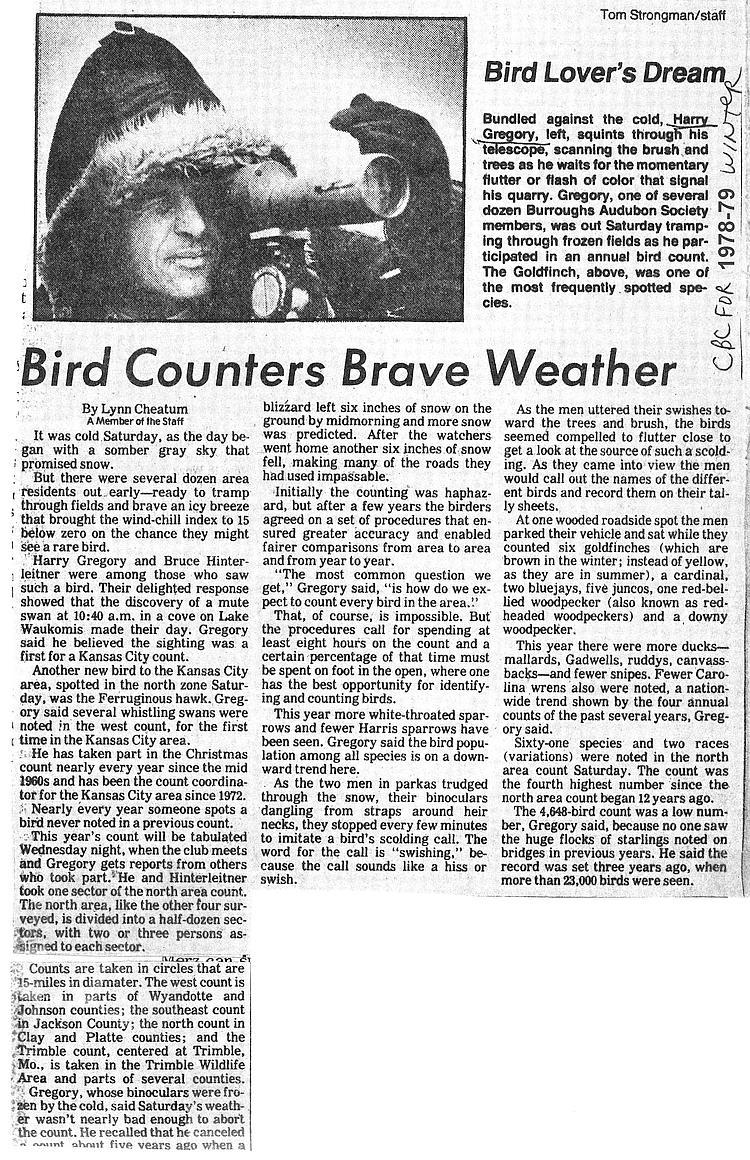 Recent frigid temperatures made me think of the conditions endured by BAS members performing the Kansas City Christmas Bird Counts in December 1978! The Kansas City Star published two articles by Lynn Cheatum about that event: “Bird Counters Brave Weather” and a few weeks later, “Census of Our Feathered Friends: Unusual Sightings Highlight Bird Count”. The first article begins “It was a cold Saturday, as the day began with a somber gray sky that promised snow. But there were several dozen area residents out early–ready to tramp through fields and brave an icy breeze that brought the wind-chill index to 15 below zero on the chance they might see a rare bird.” Harry Gregory, the count coordinator, said his binoculars froze up completely that day….“but the weather wasn’t nearly bad enough to abort the count.” Unusual sightings included a Ferruginous Hawk and a Mute Swan (later determined to be a feral bird) and “six Whistling Swans…for the first time in the Kansas City area.” [Note: These are now known as Trumpeter Swans, and their population was greatly diminished in those days–now birders in MO enjoy seeing large groups of these swans regularly, thanks to sustained restoration efforts in several Midwestern states!]

The second article proclaims, “A Peregrine Falcon, member of an endangered species, was spotted in the Kansas City area during a recent Audubon Society bird count. It was only the third time in about 60 years that the rare bird of prey had been seen here during the count…Two members of the Burroughs Audubon Society reported that they saw the falcon near Unity Village…as it pursued 3 dismayed crows, in hopes of making a meal of one of them.” Also “they saw a Bald Eagle at Lake Jacomo, the 15th such sighting since 1919.” Other highlights included over 27,000 Mallards on one lake, 380 Downy Woodpeckers, and two possible high counts for the nation: 69 Swamp Sparrows and 17 Long-eared Owls.

It is important to note that at the time, there were FOUR widely scattered count circles (each 15 miles in diameter!) that were all considered part of the “KC Count” area. The Swamp Sparrows and Long-eared Owls mentioned above were seen at Trimble, MO, which later became an independent CBC circle (Smithville Lake). The “west zone” circle later became the Olathe CBC. The present-day “KC CBC” area now consists of just ONE 15-mile diameter circle, centered on Unity Village in Jackson County (once called the “southeast zone”). Unofficial surveys were also performed in other seasons, so a great variety of species were recorded in the KC Count area throughout the year. With such a large area to cover, it’s no wonder that “65 persons spent 120 hours driving more than 1,000 miles, identifying and counting birds. They walked 120 miles, in accordance with instructions, for maintaining a consistent count from one year to another”.

The Christmas Bird Count, begun in 1900, is the longest-running continuous wildlife census in the world. And BAS members are right in the heart of this great citizen science project each year, keeping track of our cherished birds. Thanks to all who participate, whether counting from cars, watching feeders, or wading in the snow. The birds need you now as much as ever!