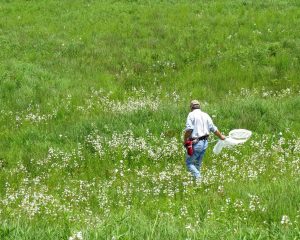 In Spring of 2016 Larry Rizzo of the Missouri Department of Conservation approached Burroughs about contributing to a study of the bees and flora at two Kansas City remnant sites.  These surveys would give us a current state of the natural areas and a baseline for future work and studies.  Burroughs was able to sponsor the bee study and a small part of the flora study.  The Westport Garden Club received a grant for the remainder.  One of the most interesting thing to come from the study was a kleptoparasitic bee that had not been seen anywhere in the country since the 1950s.

Inspired by the diversity and numbers of bees seen on the Missouri remnants, Matt Garrett with Johnson County Park and Recreation District asked Burroughs if we would co-sponsor a bee study on the Kansas side.  Burroughs was glad to be able to help.  Once again, the uniqueness and diversity of bees preserved in these suburban parks was exciting- including a possible new bee species!  More studies to come on that in 2018.

These sites are maintained by the KCMO Parks and JCPRD respectively with added help from KC Wildland.

Please see the below article by Tom Schroeder for more on the bee studies and these special sites.

The amazing diversity of native bees in the Kansas City area has been revealed in a two year study of four native remnant areas.  Burroughs Audubon Society, Johnson County Parks, and Bridging the Gap/Kansas City Wildlands funded two studies.  In 2017  Ogg Prairie in Shawnee Mission Park and Kill Creek Park Prairie were sampled.  In 2016 Jerry Smith Park Prairie and Rocky Point Glade in Kansas City’s Swope Park were sampled.  Sampling was done by Mike Arduser, a well known native bee expert, between April and October each year.  What was found is not only helpful in managing the sites but useful to area gardeners and people interested in wildlife. 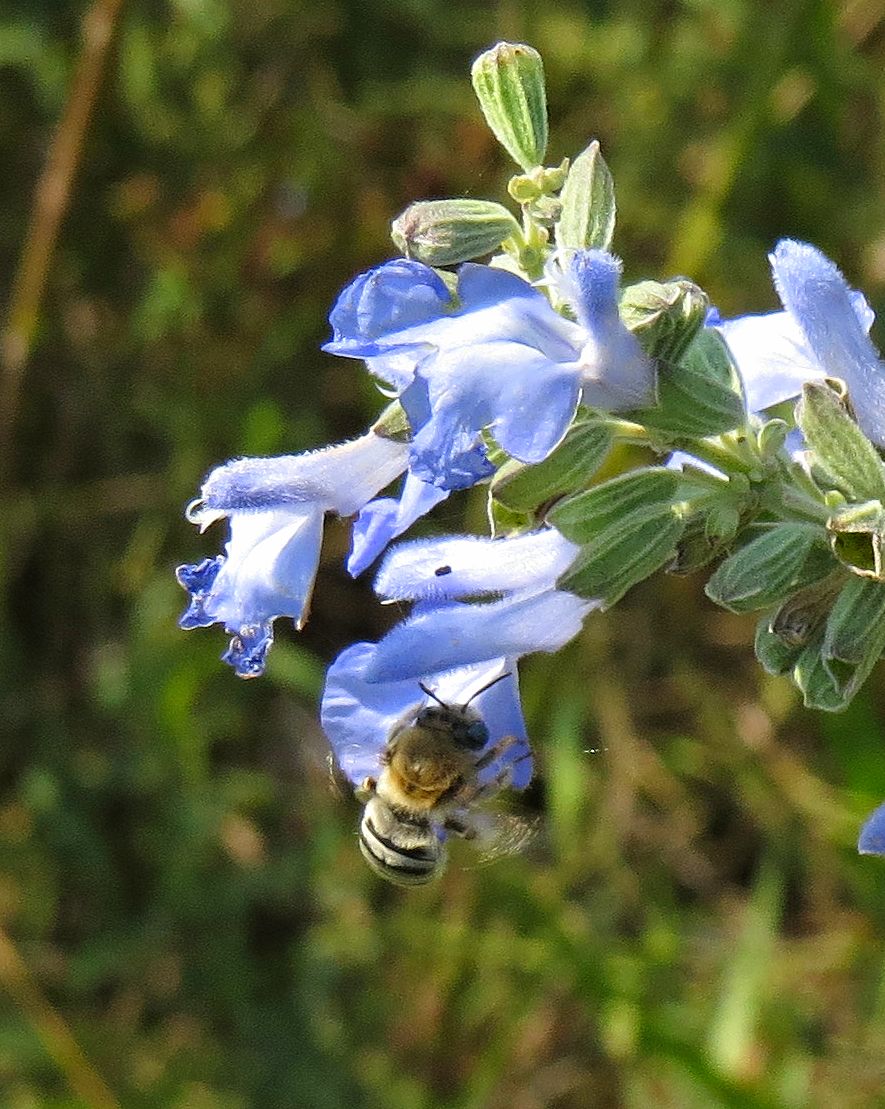 Blue Sage bee- a specialist that was found not only on Ogg Prairie but also nectaring on blue sage behind the administration offices in Shawnee Mission Park. Photo by Tom Schroeder

The studies found an incredible diversity of bee species.   The studies found 110 different native bee species visiting the four sites.  Many species were common for Prairie ecosystems, but some were rare and unique.  There might even be a bee species not previously known to science living in Shawnee Mission Park.  Many bee populations are in decline throughout the United States.  Having a diversity here, can allow us to contribute to preserving native bee species.

The studies found there were many specialist bees.  These are bees that will only feed their young the pollen from one type of plant.  To have a population, there must have been a many year, undisturbed relationship between that one bee species and one plant species.  There were bees that only gathered pollen from Pale Purple Coneflower, Bellflower, Thistles, and Blue Sage.  There was one bee that only nested in empty snail shells. Without a population of snails at the two sites, the bee could not exist there.  Specialist bees are the most vulnerable to the impacts of human development.

The studies revealed that even a small remnant Prairie, in a suburban park, could support a large diversity of bee species.  Ogg Prairie, an eight-acre site in Shawnee Mission Park, had an incredible 55 native bee species visiting there.

The plants that the bees frequented can inform gardeners what to plant in their gardens to support native bees.  The largest number of different bee species visited Penstemon, Ragwort, Goldenrod, Aster, Redbud, Sunflower, and Mountain Mint. 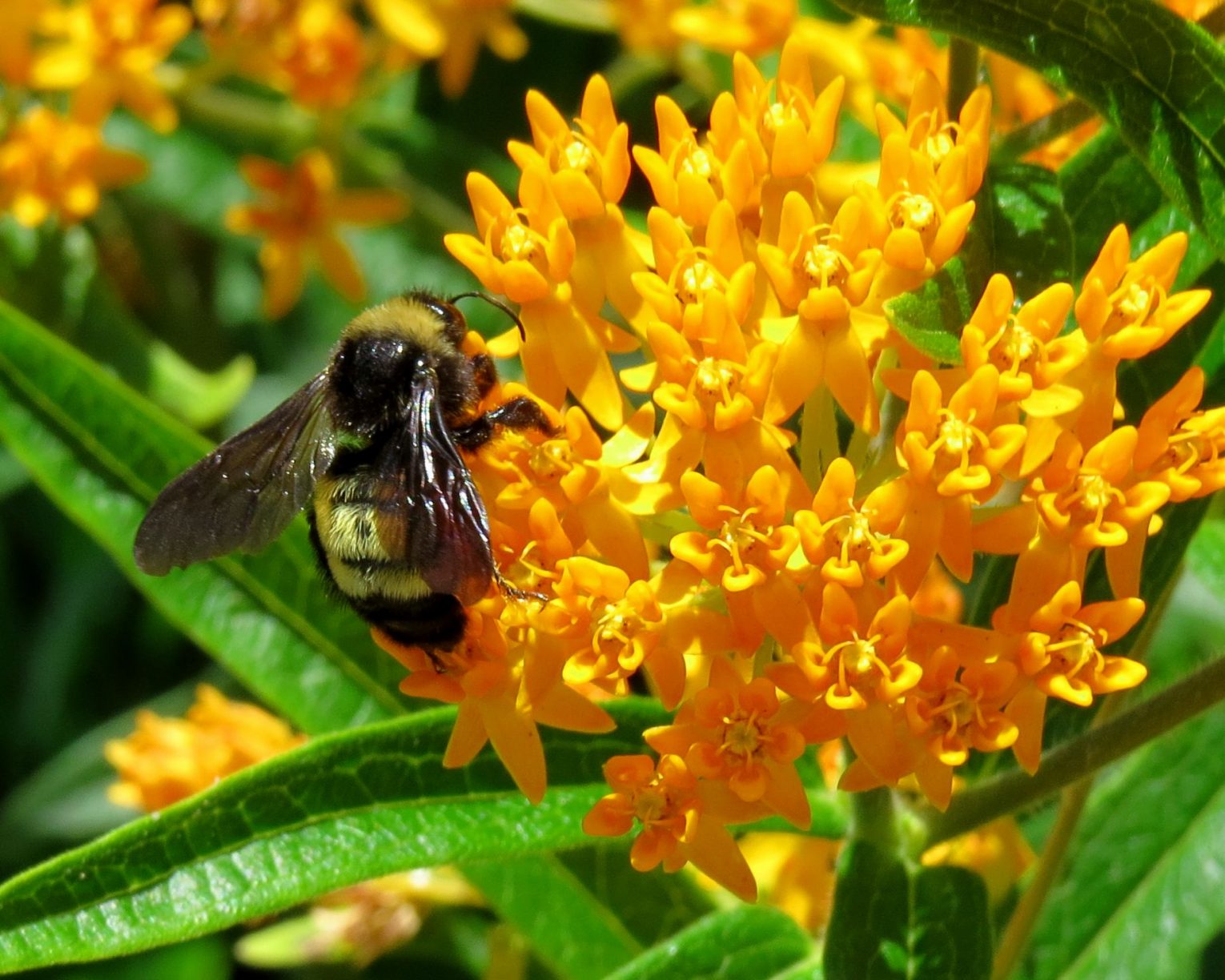 A population of the American Bumblebee was found at two of the sites.  The Xerces Society for Invertebrate Conservation reports this species has had an eighty percent decline in population in the eastern United States and they consider it imperiled and needing protection.

Suburban wild areas can be refuges for bee species that are threatened by human development.  These areas need active management to maintain a diverse habitat and to improve areas that have been degraded.  The studies demonstrated that the wild areas can harbor a diversity of bee species that we can help protect.  We can help preserve this native, wild heritage for future generations.