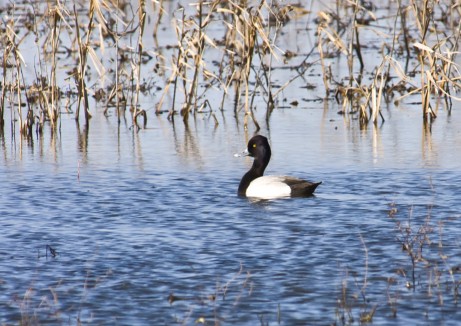 Each fall, with blazing colors coating the trees, waterfowl are beckoned back to Missouri, Kansas and southward.  Often listed as favorites for their colorful plumage and sometimes canny behavior, ducks recharge and rest on the lakes and wetlands.

A record number of 49.5 million breeding ducks were reported on surveys in 2015.  That’s 49.5% above the average from 1955-2014.  Here’s a list of how specific species are doing compared to their long-term average numbers.

One of the concerns that came out of the 2015 season was the decline in prairie pothole numbers.  Prairie potholes declined from 7.2 million to 6.3 million, a drop of 12%.

Known as the duck factory of North America, prairie potholes are depressions left behind by glaciers over 10,000 years ago. They retain water and serve as the breeding grounds for ducks.  This year there was great concern over very dry conditions in the early spring.  Some habitat benefitted from late spring rain.  Ducks also skipped over the dry US conditions and moved further north into Canada and the Boreal forests to breed.  High number from last year gave good numbers to this year’s breeding population.

With the loss of the grasslands, many prairie potholes have also been plowed over, lost to development or degraded past being able to support ducks and the ecology they depend on.  Many conservation groups are working to restore and reclaim many of the prairie potholes that exist to Missouri’s north and west.

One of the largest programs to help wetlands and the waterfowl that depend on them is the Federal Duck Stamp.  Out of every dollar spent on the duck stamp, $0.98 goes to lease or purchase habitat in the National Wildlife Refuge system.  You can now purchase Duck Stamps through the American Birding Association.