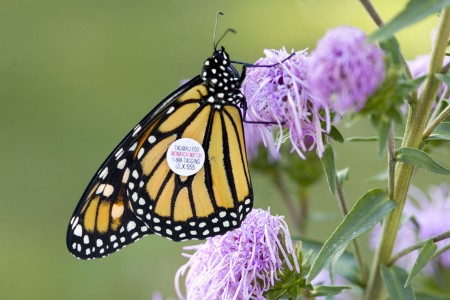 Burroughs Audubon and a consortium of partners are pleased to announce a major grant award of $229,868 from the National Fish and Wildlife Foundation to restore or improve 1,400 acres of monarch habitat in greater Kansas City. Monarch butterfly populations have declined by over 90% during the past decade, primarily due to habitat loss, and Kansas City lies in the heart of monarch migration. The National Fish and Wildlife Foundation (NFWF) announced the recipients of the 2015 Monarch Conservation Fund grants on September 28, during the peak of monarch migration. Out of 115 proposals, NFWF chose 22 recipients, with over $3.3 million dollars awarded. Through the funding and the work of many partners across Kansas City, not only will monarch butterflies find new habitat and food sources in our community, but hundreds of thousands Kansas Citians and visitors will learn about the monarch’s plight, the crucial importance of monarch habitat and what they can do to help on both small and large scales.

A special thank you to all the members of the Kansas City Native Plant Initiative for their support and efforts on this very exciting project.

•Over 1,000 acres of potential habitat made available for restoration by Johnson County Parks, with the help of a new “flail vac” purchased by the grant. Among this acreage are 100 acres of new habitat along the Mill Creek Streamway Trail in Shawnee Mission Park, which hosts 4 million annual visitors.

• 40 acres will be restored along KCMO highways, creating migratory pathways and breeding/nectaring sites while reducing mowing and improving aesthetics.

• 5 acres of native monarch habitat will be created on KCP&L properties, including their new, state of the art, sustainable training facility, highlighting the company’s commitment to environmental issues

• A 600 square-foot monarch demonstration garden will be created in Loose Park by Powell Gardens, KCMO Parks, and the Westport Garden Club, inspiring one million visitors a year to create a monarch garden at home. The garden will also promote ‘Grow Native’, a program of the Missouri Prairie Foundation.

• Audubon and other partners such as the Platte Land Trust will give away 4,000 native milkweed and nectar plants and resulting in approximately 2,000 sq ft of native monarch habitat plantings in area schools.

• The KC Monarch Habitat grant will create unprecedented cooperation, awareness and creation of monarch habitat across the KC area. Please join us in celebrating this opportunity to restore monarch populations while uniting our community on both of state lines. Many thanks to our distinguished partners who helped to secure this coveted award!