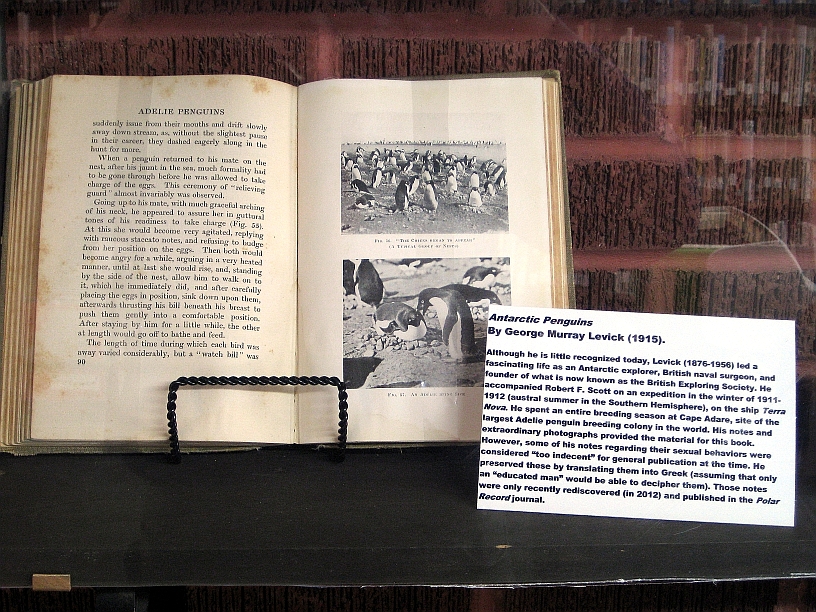 BAS Library Committee members recently created a small exhibit space in our reading room to highlight some of our historical materials. The beginning of this brand-new year demanded a fresh exhibit, and what could possibly be more appropriate during the dark depths of winter than volumes about penguins? These unique birds have intrigued scientists for centuries, since some were first observed by Vasco de Gama’s explorers in 1497 near the southern tip of Africa.1 (Apparently Esther O’Connor was also a dedicated penguin fan—all 3 of the featured books belonged to her.)

While researching these titles, I happily discovered that the authors were every bit as amazing as the birds they studied! Our oldest book about penguins is 100 years old: Antarctic Penguins by George Murray Levick, published in 1915 (see above photo).2 Although his name is little recognized today, Levick (1876-1956) led a fascinating life as an Antarctic explorer, British naval surgeon, and founder of what is now known as the British Exploring Society. He served in both world wars, returning to active duty in World War II at the age of 64. His medical training and experiences in the Antarctic enabled him to teach survival skills to new recruits and in 1944 he even produced a manual, Hardening of Commando Troops for Warfare.

Levick accompanied Robert F. Scott on Scott’s final Antarctic expedition, on the ship Terra Nova. Levick returned from this adventure; Scott perished in his attempt to be the first man to reach the South Pole. Terra Nova’s journey originally was to last from June 1910 to February 1912, but the ship became icebound and Levick and his fellow scientists endured an additional 8 months in the harsh winter conditions of an ice cave on Inexpressible Island. He spent an entire breeding season (the austral summer of 1911-12) at Cape Adare, site of the largest Adelie penguin breeding colony in the world. His notes and extraordinary photographs provided the material for this book. However, some of his notes regarding the Adelies’ sexual behaviors (including abuse of chicks, necrophilia, and relations between male penguins) were considered “too indecent” for general publication at the time. He preserved these by translating them into Greek (assuming that only an “educated man” would be able to decipher them). Those notes were only recently rediscovered (in 2012) and published in the Polar Record journal.3 Although a trained scientist, Levick was apparently shocked and appalled by some of the behaviors he witnessed, and judged them by human standards, calling them “depraved” and in one case noting that “There seems to be no crime too low for these Penguins”.4

The second volume, The Island of Penguins (1931) was written by Cherry Kearton. “Aha!” I thought smugly, “An opportunity to share an inspiring story of a woman succeeding in a traditionally male profession, the world of field biology in the early 20th century! Long live feminism!” No one could be more surprised than I to learn that “Cherry” was an English man. Born in Yorkshire, Cherry Kearton (1871-1940) and his brother Richard (1862-1928) were pioneers of wildlife photography and film making (see photo). They were known for being some of the earliest photographers to use “natural” blinds in order to be close to their subjects—these even included a stuffed sheep carcass. Cherry created the first photograph of a wild bird’s nest with eggs (1892); made the earliest phonograph recording of two wild bird songs (a nightingale and a thrush, in 1900); and accompanied Theodore Roosevelt for part of an African safari (1909). The Royal Geographical Society of England created an award in his honor in 1967. The Cherry Kearton Medal is still being issued today. (Even the venerable RGS, however, could not explain how he came to be “a boy named Cherry”.) 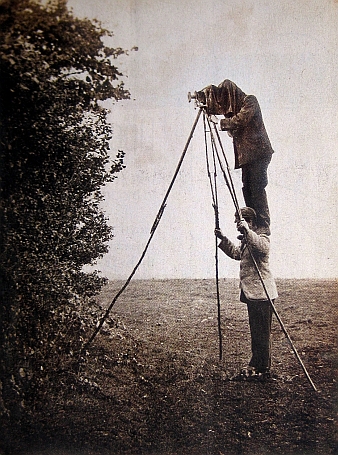 In The Island of Penguins (dedicated to his late brother), the author recounts his study of Blackfooted Penguins (also known as “jackass penguins” for their loud vocalizations) on a tiny island off the coast of South Africa. He records their behavior in great detail, but his writing shows an artistic rather than scientific orientation. Many of the birds are given names and are described in human terms (“husbands”, “wives”, “enemies”, “friends”, etc.). He even gave some of them names such as “The Tramp”, “The Cherub”, and “One-Leg”. Chapter titles include “Family Matters” and “Setting Up House”, giving the book a rather lighthearted and “Disney-esque” tone. Witness the following excerpts:

“Once the children have reached that important age when they are allowed to wander more or less unrestricted, they have a great deal of fun on the island. They are extremely imitative, like all children, and anything that mother and father do they want to do likewise…They also make friends with the other children in the neighborhood, squabbling with them and making up parties to go exploring among the rocks…At last the day comes when the most important lesson of all has to be learnt, and it is usually mother’s job to teach it: the art, that is, of swimming. Sometimes, exactly as with human children, the idea of going into the water isn’t liked at all, and Mrs. Penguin has to drive her children before her, rather after the manner of a sheep-dog, down to the water’s edge.” (Pgs. 90-91.)

“My wife and I spent many months on the island…Penguins constantly wandered into the tent out of curiosity or to steal. They reared their families practically on our doorstep; they quarreled, fought, moulted, and made love on every side of us…I doubt whether, in more than forty years of nature study throughout the world, I have ever found a creature so interesting and withal so amusing…And more than once, as I looked at penguins and they looked back at me,…I wondered whether I was the naturalist studying that strange specimen, the penguin, or whether they were the naturalists studying that strangest of all Nature’s creatures—man.” (Introduction, Pgs. xvi-xviii.)

It is ironic that, in contrast with Levick’s observations of what he considered perversions in the Adelie penguins’ sex lives, Kearton has only praise for his Blackfooted penguins:

“…he is virtuous and faithful; and as a model in married life he is supreme…” (Introduction, Pg. xviii.)

Were the mating habits of the Blackfooted penguin really so different? Was Kearton not the meticulous observer that Levick was? Or did Kearton deliberately choose to repress details that would upset his intended audience? The answer is probably lost in the mists of history.

Strangely, this volume is not mentioned in some of the most commonly available online accounts of his life and work, although it was considered valuable enough to be referenced by others studying penguins. 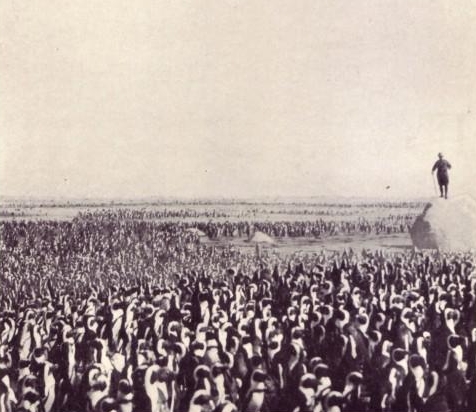 Last, but certainly not least, we have the work of an American paleontologist who, in the course of his long and distinguished career, developed an infatuation with penguins. Penguins: Past and Present, Here and There was written by George Gaylord Simpson in 1976. “Penguins are habit forming” he admits in his book’s preface, also “beautiful, interesting, inspiring, and funny”. Simpson (1902-1984) was first and foremost a major contributor to modern evolutionary theory. He worked at the American Museum of Natural History in New York City for almost 30 years; his specialty was extinct mammals and their migrations between continents. Between 1943 and 1973 he received 9 prestigious awards for his 3 books on evolutionary theory and his numerous research papers. Tempo and Mode in Evolution (1944), The Meaning of Evolution (1949), and The Major Features of Evolution (1953) all helped create what is known as modern evolutionary synthesis, a joining of ideas from the fields of genetics, population biology and natural selection to explain the process of evolution.

During his tenure at the AMNH, he discovered a neglected collection of fossil penguin bones and this sparked a lifelong interest in this group of birds whose evolutionary history spans at least 40 million years. Simpson’s book gives an overview of all 18 extant species, and lists both Levick’s and Kearton’s works as references. Simpson was also prescient in noting the increasing frequency of oil spills in the ocean environment and the dangers these posed to penguins and other marine creatures. This concise and readable book, appearing at a time when public interest in ecology was at an all-time high, undoubtedly led many others to become penguin devotees as well.